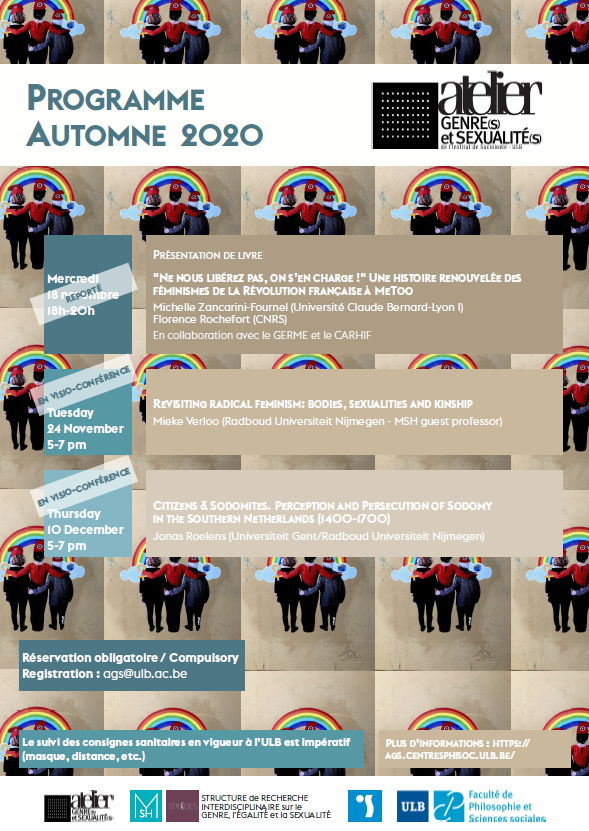 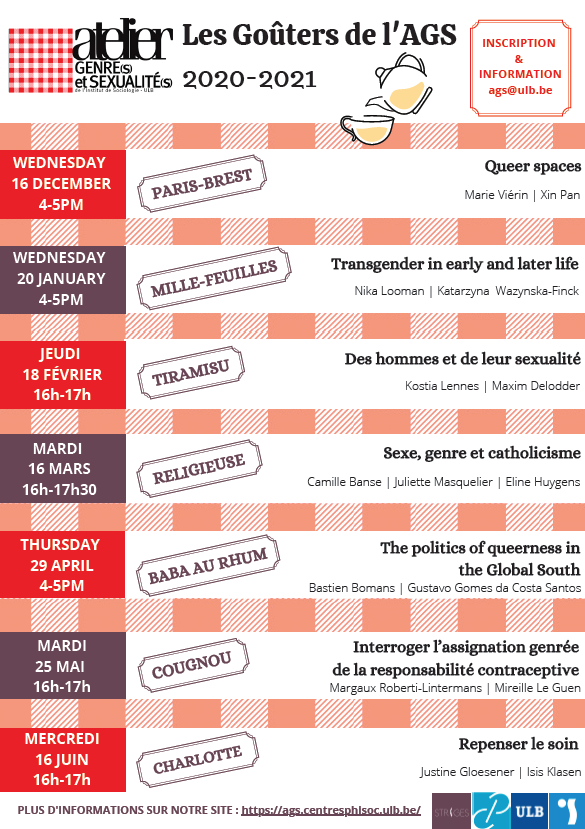 The Atelier Genre(s) & Sexualité(s) at the Université Libre de Bruxelles is launching a monthly webinar (on Zoom) for doctoral and post-doctoral researchers working on issues related to gender and sexuality.
Given the current context, the main objective of this webinar is to allow young researchers on gender and sexuality, who sometimes find themselves isolated in their own institution, to connect with a community of specialists in their field, and to disseminate their work in a safe space.
This webinar will be held on a monthly basis from 4 p.m. to 5 p.m., between December 2020 and June 2021. The 20-minute papers are gathered by themes.

Since the late nineteenth century, which witnessed a substantial increase in literary works portraying various types of intimate relationships between women, the issue of expatriation has often been directly or indirectly related to the life experience(s) and quest for identity of non-straight female characters. This connection echoes – to a certain extent – the historical reality of that era: examples of famous expatriates include writers Gertrude Stein, Natalie Clifford Barney, Djuna Barnes, Renée Vivien, amongst other female artists who moved (mostly) to France in search of more progressive spaces to express themselves and promote the non-heteronormative content of their work. By the early 1920s, Paris had become the European destination of choice in this respect, soon to be followed by Weimar-era Berlin and its nightlife culture. It is no surprise that instances of such “queer exoduses” began to crop up in literary fiction. In these works, expatriation frequently appears as a prerequisite for the female subject to evolve outside the boundaries of the heterosexual norm. My talk aims to analyse the presence of this particular phenomenon in two Dutch novels written in the inter-war period: De goddelijke zonde (The Divine Sin) by Edith Werkendam (1928) and Terug naar het eiland (Back to the Island) by Josine Reuling (1937). My analysis will focus (amongst other things) on the construction of queer identity in exile, as well as on the complex links that exist between the protagonists and their homeland(s).

I completed a master’s degree in Germanic languages and literatures (Dutch-German) at the University of Liège (Belgium) in 2017. After graduation, I started working as a research assistant and PhD candidate at ULiège. As a follow-up to my master’s thesis, which focused on the portrayal of Greek poetess Sappho in 19th- and 20th-century Dutch literature, my doctoral project aims to explore the relationships between women as depicted in Dutch-language literature during the first half of the 20th century, both through the lens of gender studies and cultural studies.

Belgium has been considered as one of the most advanced countries in the world to guarantee rights for LGBTQ+ people. According to Rainbow Map and Index 2020 produced by ILGA-Europe, Belgium ranks the second place of all European countries on its legal and policy practices for LGBTI population (ILGA-Europe 2020). Despite the progress in policy level, however, LGBTQ+ young people are still confronted with discrimination and suffering from wellbeing issues in everyday life. This fact raises the expectations towards local LGBTQ+ youthwork as a “safe space” for people with nondominant gender and sexual desires. However, LGBTQ+ organizations in Flanders may not be as “safe” and “emotionally supportive” for every participant as they are assumed and expected to be. They may even be a space which facilitates the reproduction of segregation based on ethnic, gender, and reinforces a specific and exclusive way of doing activism. Through qualitative research and interviews, this paper intends to examine the segregation and a possible dynamic of the production of exclusionary norms in LGBTQ+ organizations.

Xin Pan is a KU Leuven PhD student in Geographies of Sexualities. She is lost now and then but still enthusiastic in interdisciplinary studies in Anthropology and Geography. Her current research is predominately focused on queer migrants and local/transnational LGBTQ activism. Xin has a fond interest in social movement, HIV/AIDS, gender, and border studies. She is actively engaged in LGBTQ activism in China, and has been working for an NGO (Gay and Lesbian Campus Association of China) focusing on promoting gender equity education over the last six years, which draws her to constantly consider about the possibilities, tangles and ethics about being a scholar and an activist. Also, she is excited by diverse and creative ways of academic output other than texts, such as graphic anthropology.